Check out the upcoming events where you can meet and share experiences with Merrie Klazek, and many other artists.

“ Klazek shows that the trumpet can be a gentle and tender instrument, full of warmth and depth, conveying an emotional range rarely heard on the instrument.” - Wholenote Magazine, Toronto.

Canadian trumpeter Merrie Klazek, is a versatile and respected artist in the world of performance and education. Fluent in orchestral, chamber, solo, traditional, and popular music, Merrie joined the full-time faculty at the University of Victoria’s School of Music in 2016, after 21 years of playing principal trumpet in Canadian orchestras. Merrie holds a BMus with distinction from the University of Calgary (’93) and a MMus from Northwestern University (’94) in Evanston where she studied with the late Vincent Cichowicz. Her musical travels have taken her around the globe with highlights including Spoleto Festival Italy, Musik Contemporaire Strasbourg France, Tokyo's Bunka Kaikan Hall, Canada’s Stratford Festival, Hungary's Niyrbator Festival, as well as performances in Cuba, Ireland, and the USA. She has appeared as a soloist with a variety of orchestras, and alongside fellow trumpeters including Jens Lindemann, Allen Vizzutti, Karen Donnelly, Paul Merkelo and more. Merrie’s first solo recording entitled “Songs to the Moon” with pianist Jennifer Snow, received critical acclaim and was featured on TVO Studio 2 and CBC Radio. She appears on five JUNO nominated albums, and is currently working on a solo recording which will highlight the trumpet in settings of world music. Merrie has appeared as a presenter and adjudicator at the International Trumpet Guild Conference (’08,’11,’18), and the International Women’s Brass Conference (’10,’12,’17) where she has been a finalist in the solo competition and has performed her solo recital “Songs of Passion” with pianist Rebecca Wilt. Merrie was principal trumpet with the Thunder Bay Symphony from 1999-2018, and has held the same position with the Victoria Symphony and Orchestra London Canada. To celebrate her 19 year tenure with the TBSO Merrie created and performed a solo Symphony Pops show called “Brass and Bow” alongside renowned Celtic fiddler, Pierre Schryer. Merrie has performed in the trumpet sections of many of Canada's top orchestras and spent 14 years as a sessional instructor at Lakehead University before joining the faculty at UVic. Merrie’s teaching philosophy is rooted in the Arnold Jacob’s concept of Wind and Song, which she believes to continually reveal its genius and simplicity. Among other creative projects, Merrie is developing a comprehensive pedagogical handbook called “Pointers and Pitfalls – a Reference Guide for Trumpet Orchestral Excerpts.” Her popular lecture titled “Preparation and Performance” explores the development of concrete tools for achieving success in trumpet performance, and was recently presented at the 2018 ITG in San Antonio, Texas and the 2019 Canadian Women’s Brass Collective in Toronto. Merrie is an endorsing artist for Wedge Mouthpieces, Robinson’s Remedies, and Conn-Selmer Bach trumpets. 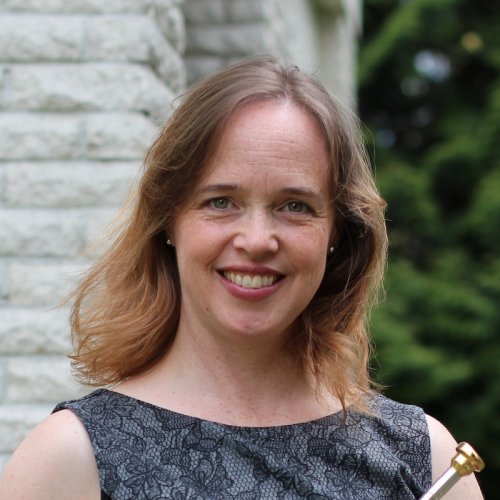